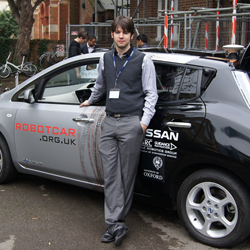 Will joined the Mobile Robotics Group in 2012 to work on localisation and navigation systems for autonomous road vehicles. He is the leader of the autonomous Nissan LEAF project and is coordinating the release of the Oxford RobotCar Dataset.

Will holds a BEng (Mechatronics) from the University of Queensland and a PhD from the Queensland University of Technology, both in Brisbane, Australia. His research topic was large-scale appearance-based SLAM using a continuous trajectory representation (CAT-SLAM).

During his PhD, Will spent time as a visiting research student at the Mobile Robotics Group. He investigated information-theoretic methods for point cloud registration to calibrate 2D and 3D laser scanners, mono and stereo cameras and INS systems for the Wildcat platform.

In his spare time Will enjoys épée fencing.

Will is currently working on the following research topics: