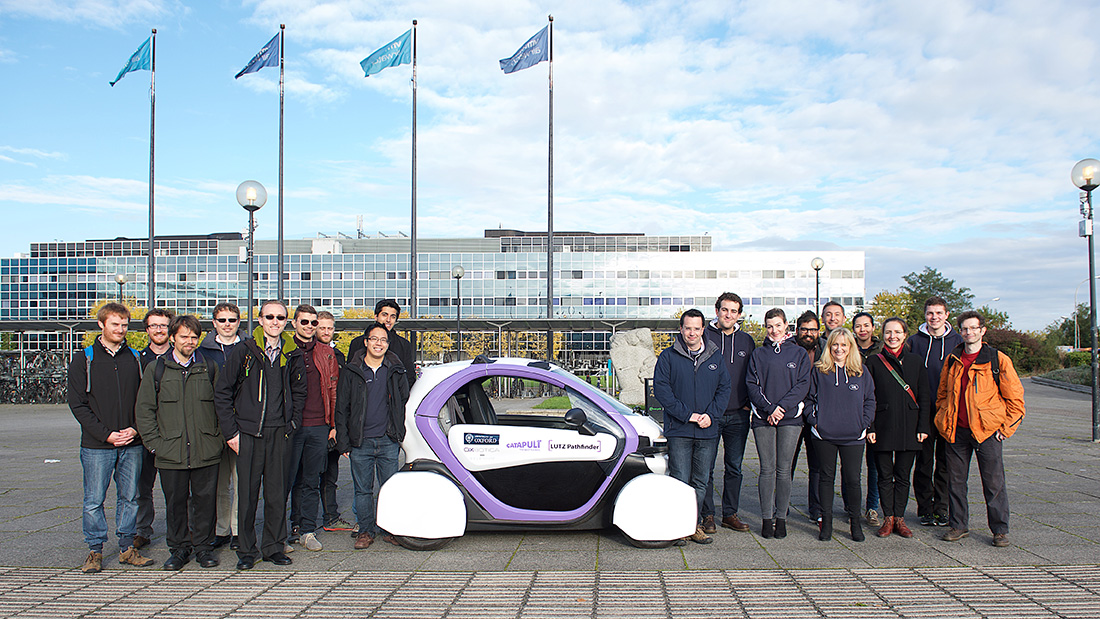 The ORI works on all aspects of mobile autonomy. We use flagship projects to force the development and evaluation of emerging technology. One such standout project is the deployment and testing  of a complete autonomy system on small “pods” for urban use.

Self-driving vehicles equipped with Oxford-developed autonomy software were tested successfully in public for the first time in the UK in October 2016. The demonstration, which took place on pavements around Milton Keynes, was coordinated by the Transport Systems Catapult (TSC) and marked the conclusion of the LUTZ Pathfinder project, which began developing autonomous technology in 2014.  In the future, it is expected that vehicles like those demonstrated in Milton Keynes will be used for local transportation in urban areas.

The autonomy software running the vehicle, called Selenium, originated at ORI with funding from the Engineering and Physical Sciences Research Council (EPSRC). Selenium uses data from cameras and LIDAR systems to navigate its way around the environment.  Selenium is being commercialised and was integrated onto an electric vehicle by Oxford University spin-out company Oxbotica.

‘It’s great to see our research ideas having a life of their own beyond the lab and being used in public, for the public. Our work with the TSC has given us the opportunity to accelerate the development of our system into the public domain and has given us a platform from which we can now take our expertise onto the world stage.’

The project team ran a number of exercises in preparation for the demonstration, including virtual mapping of Milton Keynes, assessing public acceptance, conducting the necessary safety planning, and establishing the regulatory environment with the support of Milton Keynes Council.

‘This public demonstration represents a major milestone for autonomous vehicles in the UK and the culmination of an extensive project involving UK companies and experts. Oxford University’s technology will go on to power automated vehicles around the world, and the LUTZ Pathfinder project will now feed into a much wider programme of autonomous trials across the UK. Driverless vehicles are coming to Britain, and what we have demonstrated today is a huge step on that journey.’

Experience a ride in the LUTZ POD with this 360 video.

This flagship has its genesis in the LUTZ project which was a collaboration between Oxford and the Transport Systems Catapult. As well as demonstrating autonomous vehicles, the project addressed the wider key challenge of how to increase mobility by demonstrating the potential for effective and cost-efficient movement of people in a city.

The LUTZ project saw Pods deployed in the streets of Milton Keynes in October 2016 running our Selenium complete autonomy system. Selenium draws on competencies from across our technology portfolio but some of the videos below give a sense of its deployment on Light Urban Vehicles.

ORI’s experience of operating autonomous vehicles amongst people is helping to support the UK Autodrive Consortium, a project that will see a fleet of 40 pods operating on the streets of Milton Keynes.  ORI is acting in an advisory capacity, sharing its knowledge to promote autonomous vehicles in transport solutions for the UK.

The Mapping of Milton Keynes (or wherever)

A key stage in the deployment of the technology is training, producing what we call “scene priors”. These are simply detailed maps of the environment and they are adorned with all kinds of extra information like lighting changes and seasonal appearance changes. A few of those maps can be seen in these movies below;