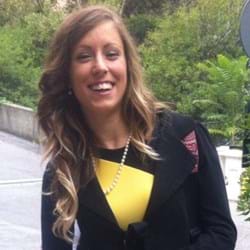 Simona is a post-doctoral Robotics Research Engineer at the Oxford Robotics Institute, University of Oxford.

Simona got her PhD from the School of Informatics at the University of Edinburgh in December 2018. She joined the Oxford Robotics Institute as a visiting researcher in May 2017, where she currently works under the supervision of Dr. Maurice Fallon. Her research is focused on laser-based localization methods for the safe and continuous operation of wheeled and legged robots in real-world environments, in the presence of challenges such as limited sensor field-of-view, varying lighting conditions, occlusions and constrictions.

Simona researched for the Edinburgh-NASA Valkyrie humanoid project and collaborated with the research team of the Dynamic Legged Systems Lab at IIT (Istituto Italiano di Tecnologia) on the HyQ quadruped project. She is an alumni of the Institute of Perception, Action and Behaviour and affiliated with the Edinburgh Centre for Robotics. She is a member of the Dynamic Robot Systems (DRS) group at the Oxford Robotics Institute. Within the group, the objective is to enable robots to operate during search and rescue missions in disaster zones or inspection of industrial areas.