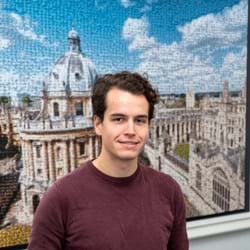 Russell joined the Oxford Robotics Institute in October 2019 as a DPhil student at New College and is supervised by Dr Maurice Fallon. His research is focused on mapping, planning and localization for legged robots.

Russell received a B.Eng. Honours in Electrical Engineering from McGill University in 2016. In his final year he was project manager of the underwater robotics team and participated in the RoboSub competition. In 2018 he received an MSc in Robotics from ETH Zurich. His master’s thesis was on the topic of planning for legged robots in confined spaces and was supervised by Dr. Navinda Kottege of the CSIRO in Brisbane, Australia. Russell was then hired for several months as a research engineer in the Robotics System Lab of Prof. Marco Hutter at ETH Zurich.