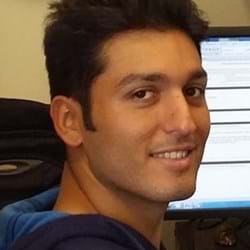 Milad received his PhD in the Department of Infrastructure Engineering, University of Melbourne, under the supervision of Dr. Kourosh Khoshelham and Prof. Clive Fraser, Australia in 2018. He joined the DRS group in October, 2018 conducting his postdoctoral research under the supervision of Dr. Maurice Fallon on localization and mapping using LiDAR, particularly for legged robots in an unknown environment. His PhD thesis is titled Robust and Accurate Localization by Visual-Inertial Odometry (VIO) in which he developed two novel VIOs: a Stereo VIO which benefits from static and temporal stereo images simultaneously and an Omnidirectional VIO which utilizes an omnidirectional camera to develop localization. His background is photogrammetry and he has established a system titled “A vertical-flight surveyor” patented by the Iranian Emblem, the Judiciary State Organization for registration of Deeds and Properties. He has also participated in many research projects including aerial and satellite image processing as well as surveying and mapping. His research areas of interest include SLAM, visual-based navigation, Kalman filter estimation, non-linear optimization, omnidirectional cameras and image processing.