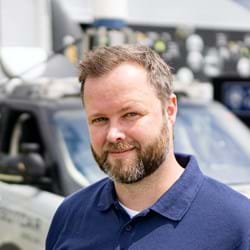 Lars Kunze is a Departmental Lecturer in Robotics in the Oxford Robotics Institute (ORI) and the Department of Engineering Science at the University of Oxford. In the ORI, he leads the Cognitive Robotics Group (CRG).

Lars is also the Technical Lead at the Responsible Technology Institute (RTI), an international centre of excellence focused on responsible technology at Oxford University; and a Programme Fellow of the Assuring Autonomy International Programme (AAIP).

He is a Stipendiary Lecturer in Computer Science at Christ Church and an Editor of both the Journal of Responsible Technology and the German Journal of Artificial Intelligence.

His areas of expertise lie in the fields of robotics and artificial intelligence (AI). His goal is to enable robots to understand their surroundings, to act autonomously, and to explain their own behaviour in meaningful human terms. To this end, his research concerns the design and development of fundamental AI techniques for autonomous robot systems. He focusses on the combination of knowledge representation, reasoning, machine learning, and robot perception; motivated by applications in complex, real-world environments.

He received his PhD (Dr. rer. nat.) from the Technical University of Munich, Germany, in 2014. During his PhD, Lars worked on methods for naive physics and common sense reasoning in the context of everyday robot manipulation. He contributed to several national, European and international projects including RoboHow, RoboEarth, and the PR2 Beta program.

In May 2013, Lars was appointed as a Research Fellow in the Intelligent Robotics Lab at the School of Computer Science at Birmingham University.  Here he worked on qualitative spatio-temporal models for perception planning and knowledge-enabled perception, contributing to the European research projects STRANDS and ALOOF.

He was a visiting researcher in the JSK Lab at the University of Tokyo, Japan (Summer 2011) and the Human-Robot Interaction Laboratory at Tufts University, US (Spring 2015).

Explanations in autonomous driving: a survey

Why not explain? effects of explanations on human perceptions of autonomous driving

Explanations in autonomous driving: a survey

Why not explain? effects of explanations on human perceptions of autonomous driving