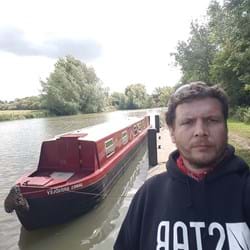 Jon joined the Oxford Robotics Institute as an electrical engineer in June 2020.

Jon was born in Oxford and joined the Royal Navy as a teenager to train as a Marine Engineering Artificer, spending time on HMS Birmingham and specialising as a nuclear submarine electrician. He has since earned a BEng(Hons) in Robotics and Automated Systems (Plymouth 2005), worked in a variety of engineering roles including electrics, electronics, robotics, automotive diagnostics, and has spent ten years as a self-employed multi-discipline engineer working on boats on the River Thames and Oxford Canal – including historic steam-powered passenger boats such as the 1883 ‘Alaska’.

Jon is 6’6”, he lives off-grid, and was the Winter 2017/18 champion of the ‘Formula Pi’ autonomous robotic racing competition.