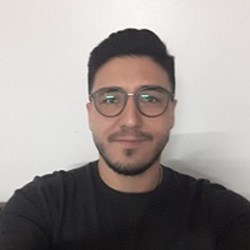 David is a Lead Software and Systems Engineer at the Oxford Robotics Institute. His work is focused on software and systems development for robotics. His topics of interests cover multi robot systems, computer vision and perception algorithms, trajectory planning and control for robot manipulation, navigation for autonomous robots, localisation and recently has shifted to higher-level decision-making processes, especially within distributed robotics systems.
He received his PhD from LAAS-CNRS, University of Toulouse, France, where he worked on vision-based navigation for mobile robots.
From 2013 to 2018 he worked as a Senior Researcher at the French Institutes of Technology (IRT Jules Verne, France), where he served as primary researcher and chief architect of several industrial R&D projects for multiple industrial manufacturers: aeronautics (AIRBUS), shipbuilding (Chantiers del'Atlantique), automotive (Renault) and energy (Orano).
Before to join the ORI he was Theme Lead for Robotics and Intelligent Automation at the University of Liverpool where he was involved in the development of an autonomous scientific laboratory powered by robotics & AI and participated in the definition of intelligent systems in the laboratory of the future.